For the Small World Foundation, the priority is supporting the mapping of the ancestral lands of the Tikuna indigenous community of San Martin de Amacayacu, and the activities which should lead to the official recognition of these lands, such as community meetings, consultancies with lawyers and experts, the lobby at the government level etc.

For both themes it is extremely hard to find sufficient funding through the regular channels of NGO´s as they are politically delicate, and also in part because the second is very complicated to plan in advance as specific – but very necessary – local circumstances are changing continuously. This obstructs significantly the creation of project proposals as required by funding agencies.

Therefore, the contributions obtained by the Small World Foundation by means of the bi-monthly newsletter and other donations, are dedicated exclusively to the mapping of the ancestal lands and the sociopolitical activities.

However, San Martin de Amacayacu does have other proposals too, which deserve attention and to which the Small World Foundation has dedicated efforts. Three proposals have been written together with or by the interested community members, but to date have not received economic support. One other is described shortly.

These projects are presented here for your information, and at random order. If one of these proposals draws your attention in particular, please feel free to contact us at heike_van_gils@hotmail.com and we will be pleased to answer your questions.

1. TIME FOR A NEW KINDERGARDEN IN SAN MARTIN DE AMACAYACU!

San Martin de Amacayacu has a small kindergarden for the smallest ones in the community: Those between two and four year old. The kindergarden was constructed 21 years ago, and has only seen some precarious maintenance efforts since. So it´s very much time we put in some extra effort and raise funds for a cheerful and decent new construction, in which the kids are stimulated to the max to learn new things and where they can feel comfortable! Please visit the project site on Facebook for many fundraising and kindergarden pictures and videos! You can also read the project proposal:

On May 13, 2014 the kindergarden opening ceremony was celebrated with the children and many community members. YES, we did it AGAIN! Check out the massive difference we made: 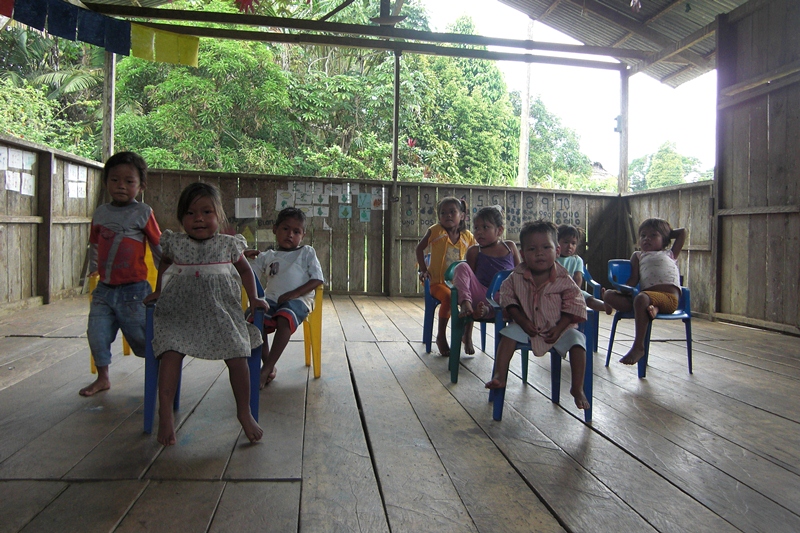 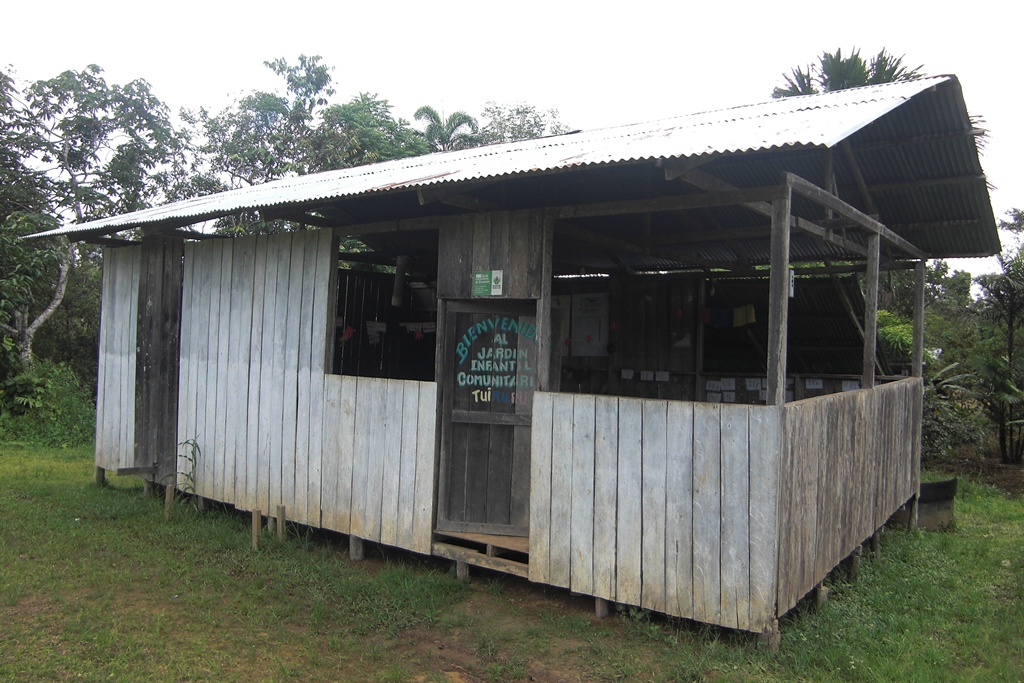 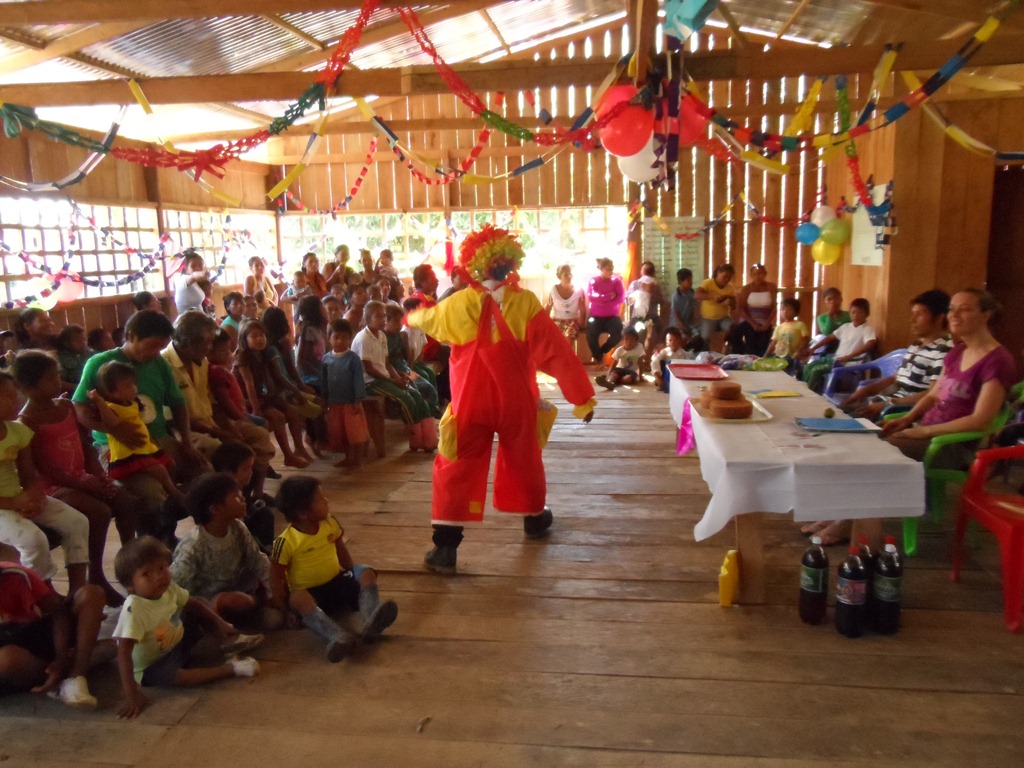 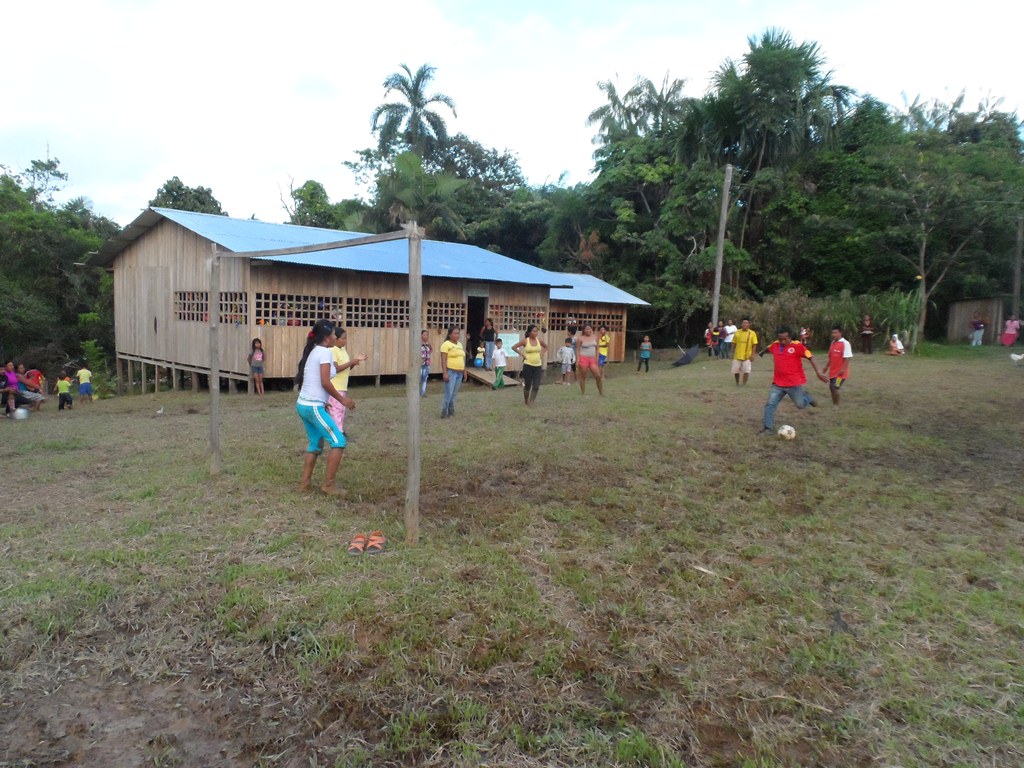 IN PRACTICE: THE ADQUISITION OF WATER TANKS

Due to the lack of economic resources and the lack of government interest which should answer the community´s various requests in the hear and far past, most houses in San Martin de Amacayacu do not have a water tank to collect rain water for drinking and cooking. Usually, a 1000 litre tank is shared by at least three households. A household on average consists of about 7 to 10 people.

Obviously, in efforts not to waste the little water available on washing, this results in dirty water tanks … In the rainy season this is not so much a problem (although it still is), but in the dry months, the situation is really precarious. Houses need an aluminium roof to be able to collect rain water. Houses with a roof made of leaves should organize installing their tanks with neighbours, at the community church or at the school. Each tank costs about 150 euros, including the transport and elevated installation on wooden posts. Each tank is more than welcome, in the end aiming to provide each of the 80 houses with their own water supply. 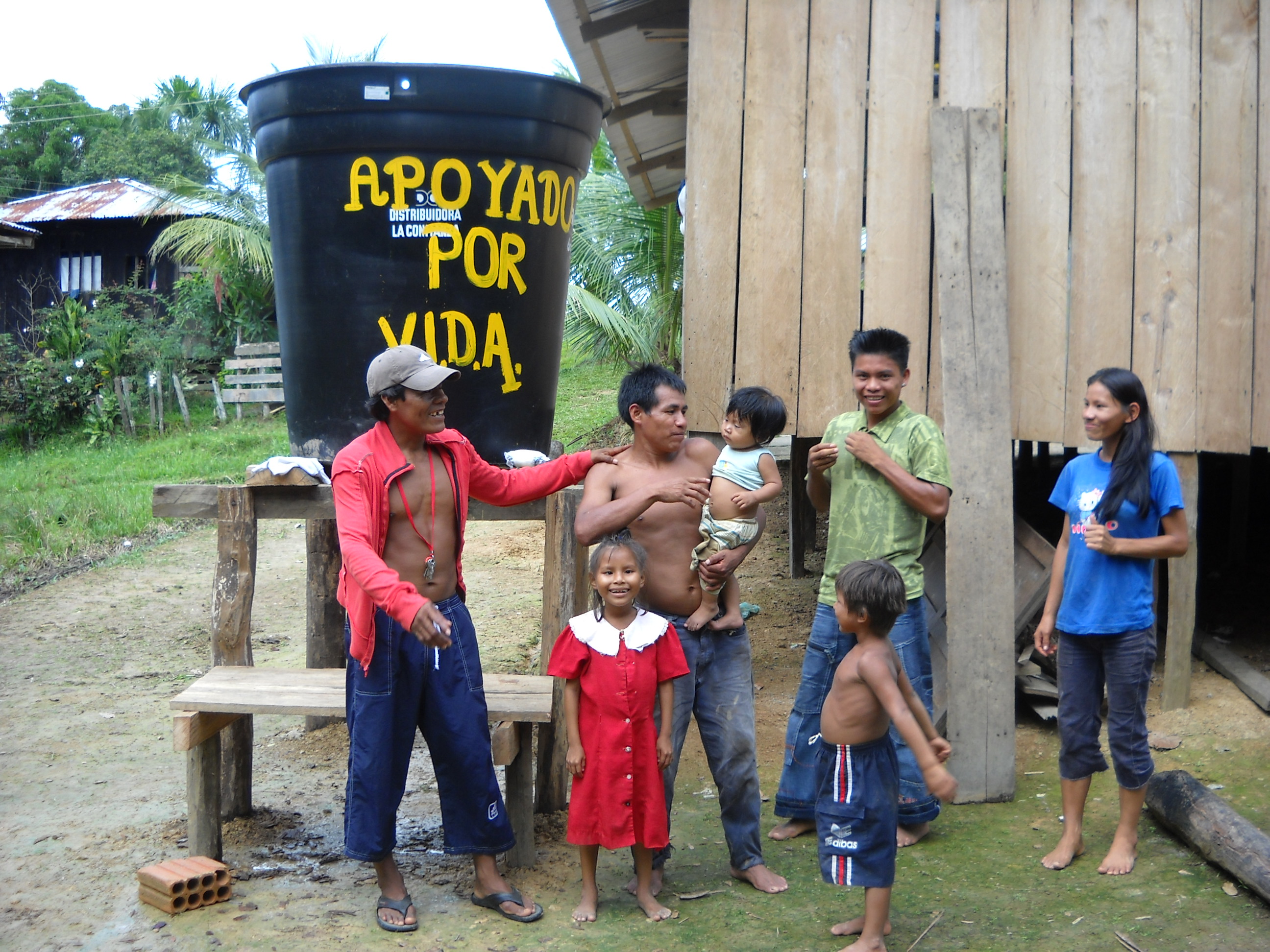 In August 2010, Get It Done secured 7575 euro for at least 25 water tanks, a new aluminum boat and a 8HP outboard motor. Please check the project website.

Four watertanks were installed in the neighbouring community of Palmeras. Another one at the school of Valencia.

If you wish to support more tanks for San Martin de Amacayacu (at about $200 each – incl transport and accesories), please contact us! 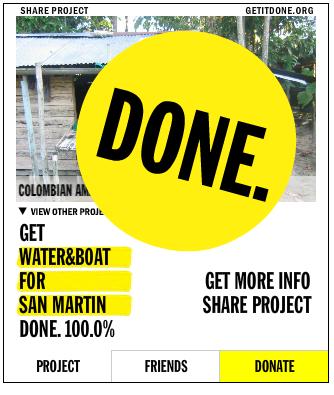 IN PRACTICE: BUILDING 60 TOILET FACILITIES IN THE COMMUNITY

Until recently, of the about 85 houses in San Martin de Amacayacu, only 29 had a more or less decent toilet. The Small World Foundation helped to construct 60 toilets by means of the projects GET 40 TOILETS FOR SAN MARTIN DONE (2011-2012) and GET SHIT DONE (2012-2013). Both were launched through the same Get It Done  platform as the water tank project. At the end of November 2011 the first project gathered the necessary budget of 9733 euro. The first purchases were made at the end of 2011. In July 2012, the last of the 40 toilet was installed. In the same year, the Small World Foundation was already raising funds for the sequel GET SHIT DONE for another 20 toilets. 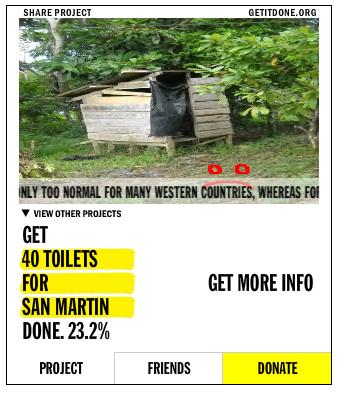 IN PRACTICE: THE CONSTRUCTION OF FISH PONDS FOR 12 FAMILIES

For years, the fish stocks of the natural rivers in the Amazon have been decreasing in numbers and in fish size. For San Martin de Amacayacu, this means that every time it is harder for the fishermen to catch sufficient to feed their families adequately. In addition, it is harder to provide exclusive meals for tourists visiting the community, while tourism is one of the very few sources of income. Several families have already answered this critical situation with the construction of small fish ponds, fed by the rain and the multiple tiny creeks crossing the landscape. Despite their small size or basic construction because of the lack of economic resources to buy the requiered expensive materials such as PVC tubes, netting and common water management substances, these ponds really represent need for their construction and further development on a small scale for each family to obtain sufficient fish in the near future.

The proposal was written in Spanish in response to a government call for fish breeding proposals in January 2008, but due to a bitter misunderstanding which consequently excluded all proposing indigenous communites, none of the nine proposals from the Amazon was elected at the time. In January 2009, the community was able to compete again.

The proposal basically consists of providing for all the mentioned necessary physical elements, which represents a cost of about 7.000 euros. As a counterpart, the community puts in additional materials, such as timber, and the pond construction labour, which represents about 3.000 euros.

In September 2009, the original proposal was approved by the Colombian Institute for Rural Development  (INCODER) and the funds of the Development Prize were used to upscale the project. 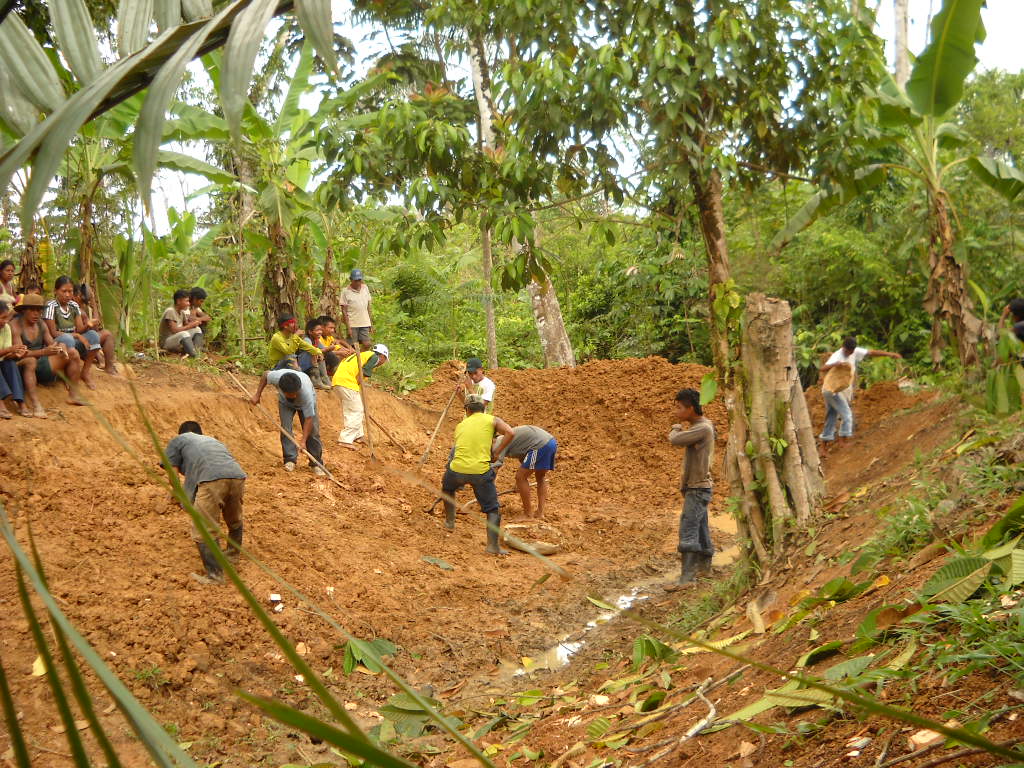 In 2012, all fish ponds had been finished and little fish were introduced in each of them. By now (August 2014), each fish pond has been able to complete 3 fish harvests! SENA Colombia also chipped in with a fish pond course (360 hours) for the fish pond owners and other community members. 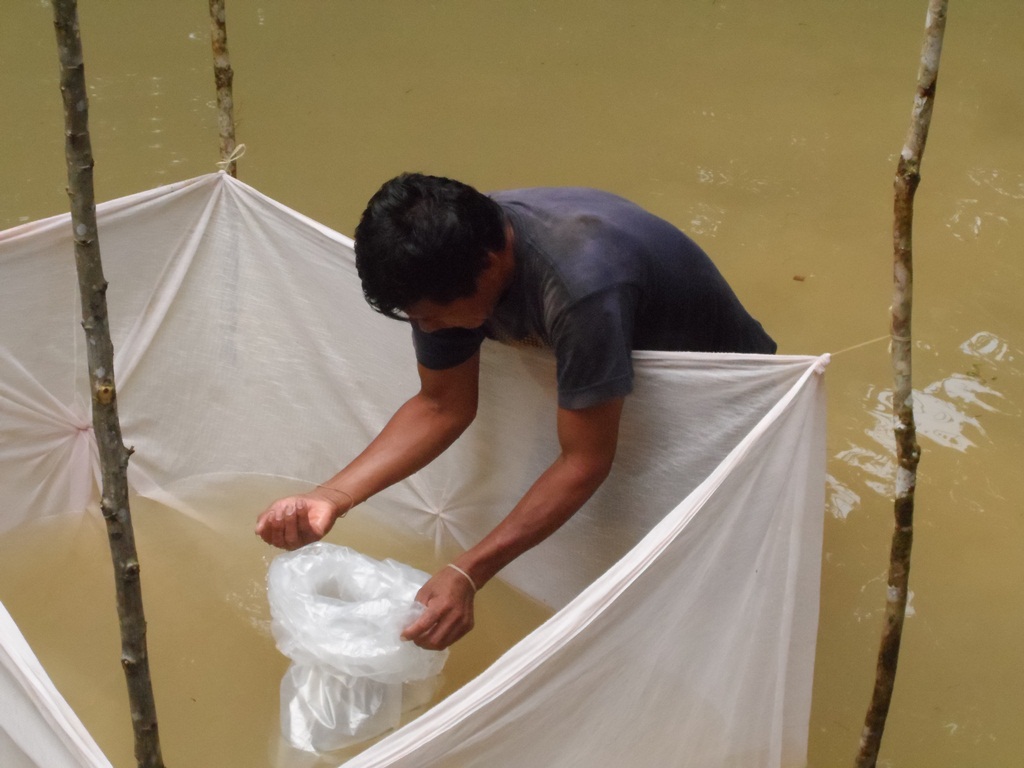 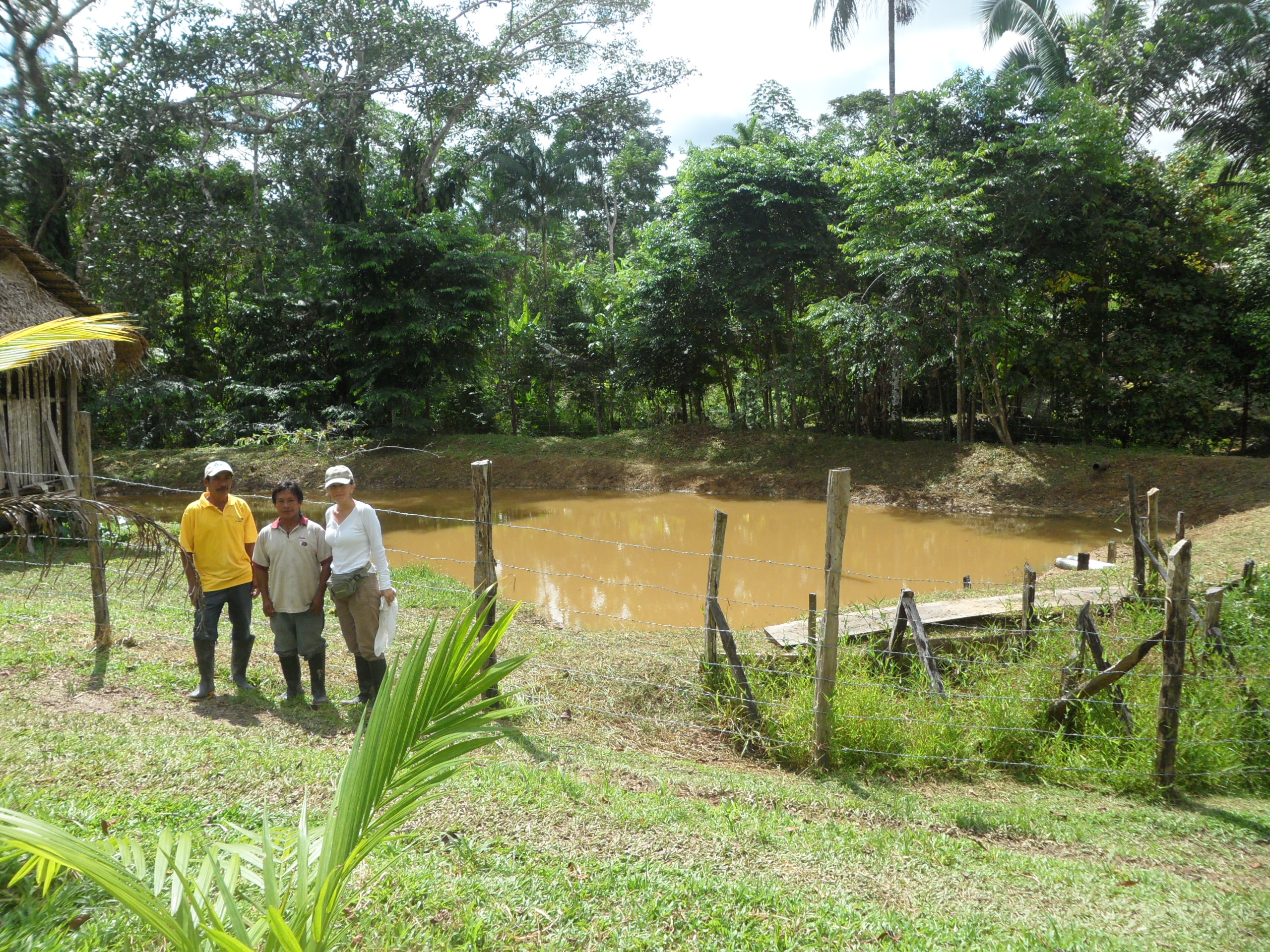 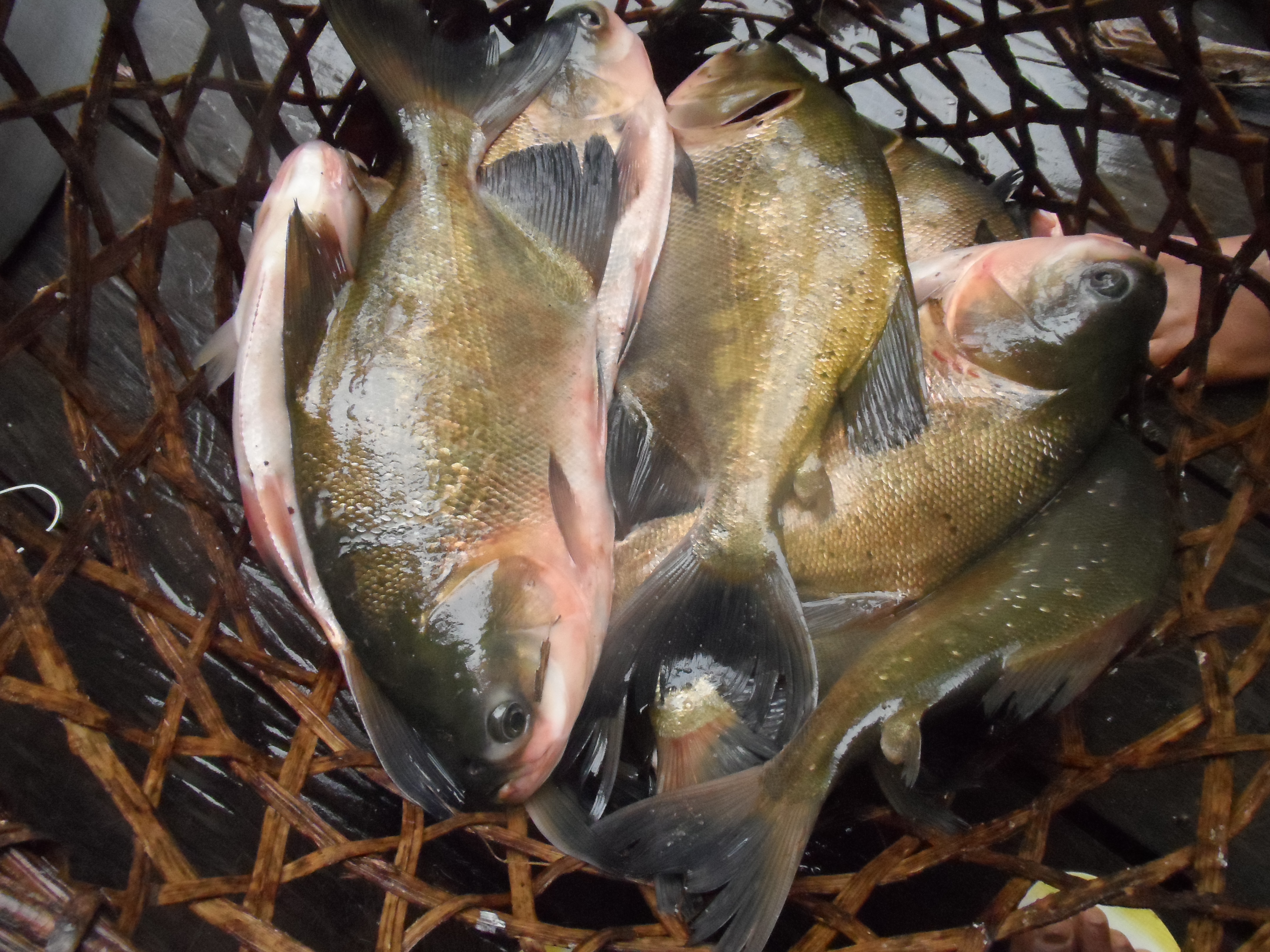 5. “AGRO-FORESTRY: TOWARDS A BALANCE BETWEEN THE PRODUCTION AND EXTRACTION OF CHAMBIRA PALM LEAVES FOR INDIGENOUS HANDICRAFTS IN THE COLOMBIAN AMAZON”

IN PRACTICE: DEVELOPING A MECANISM FOR SUCCESSFULLY PLANTING CHAMBIRA PALMS

Over the last few years, and as a consequence of the growing number of tourists in the community of San Martin de Amacayacu, the production of handicrafts has augmented a lot and this has had a detrimental effect on the existing chambira palms, whose leaves provide the fibers used to make the handicrafts. After cutting the leaves, the palms require time to recover and grow sufficient new leaves for its own maintenance. However, the current demand for fibers does not allow this recovery.

The difficulty of this phenomenon of modern times is that theres is very little knowledge on how to sow the palm. Usually, people use the palms that simply happen to have grown on their lands. The sowing efforts of the worried artesans have so far not led to an adecuate protocol, despite some promising preliminary results. By means of really dedicating attention and efforts to this situation, the proposal aims to lead to the know-how of sowing the chambira palm to provide for the required fibers for the handicrafts which often represent the only source of family income.

The proposal was written in English in response to a call of the Lindbergh Foundation in 2007, but unfortunately was not selected for support. However, the proposal has not lost its vality since, and the Small World Foundation continues its lobby for this crucial project. The total project cost is estimated at 9.000 euro. 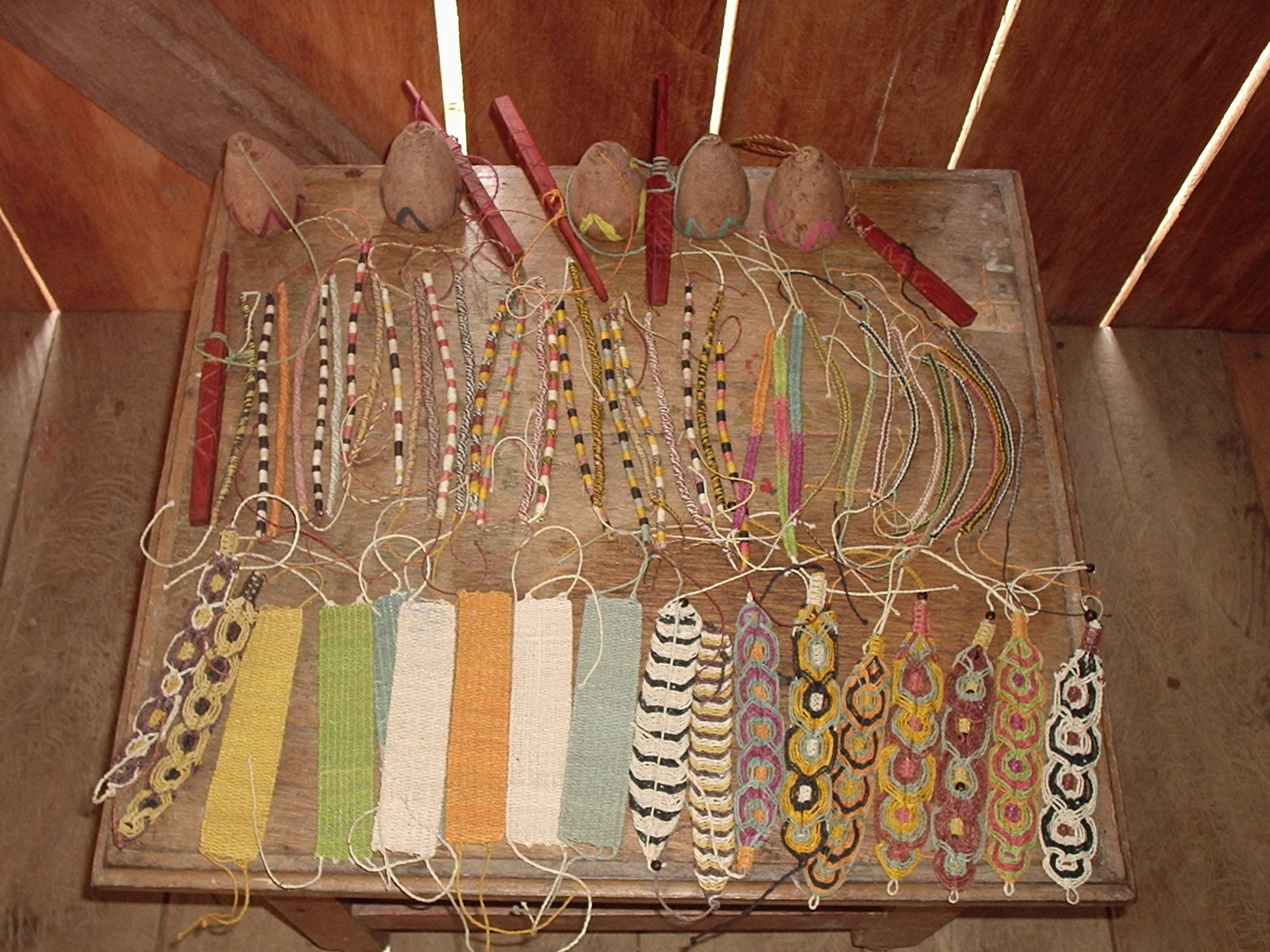 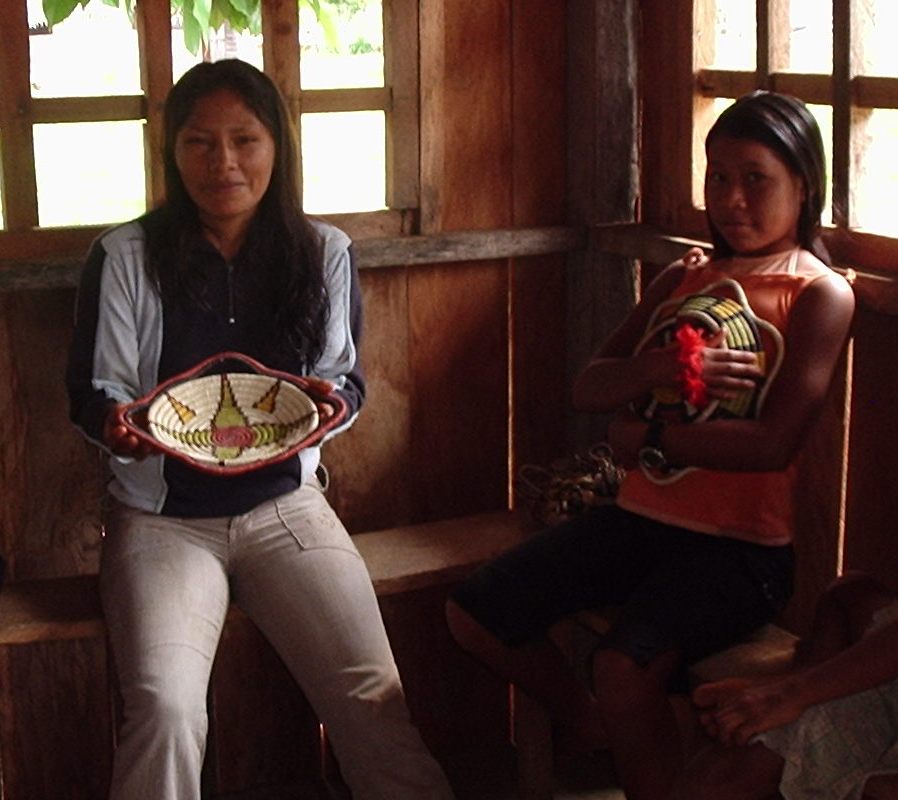